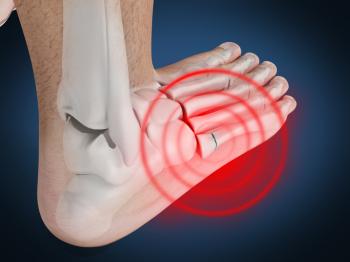 
A Jones fracture is the most common type of metatarsal fracture, and it is the most serious type of fracture that can occur in this bone.


This particular fracture is named for the orthopedic surgeon, Sir Robert Jones, who first reported and treated the injury in 1902.

What is a Jones fracture?

A Jones fracture occurs on the fifth metatarsal of the foot.


A Jones fracture occurs in a region known as the metaphyseal-diaphyseal junction. This is the area between the base and shaft of the fifth metatarsal. This area receives less blood than other areas in the foot, making healing difficult.


This type of fracture normally results from stress on the bone caused by repeated motion, but it may also be caused by a sudden acute injury.


The metatarsal bones are the long bones on the top of the foot that connect the ankle with the toes. There are five metatarsals in each foot. Each metatarsal bone has a base located next to the heel, a shaft, a neck and a head.


The fifth metatarsal is the metatarsal on the outside of the foot that connects the ankle with the little toe.


The metatarsal bones help people balance while standing and walking. Because these bones get so much use, it’s very easy to injure them through overuse. Sudden acute injuries of the metatarsals are common after a sudden impact or severe twist of the foot.

Symptoms of a Jones fracture


A Jones fracture has many of the same symptoms as other types of fractures. A person with a Jones fracture may know they have injured the foot right away if the injury is sudden and causes immediate symptoms. These symptoms include:

Types of fractures in the fifth metatarsal


There are three basic types of fractures in the fifth metatarsal, including Jones fractures.


The other two types of common fractures in the metatarsals include:


When to see a doctor

A suspected Jones fracture should be presented to a healthcare professional who may take an X-ray to diagnose the pain.


Anyone who suspects they have a fracture should see a foot and ankle specialist as soon as possible.


In cases of an acute injury, medical care should be sought promptly. A patient with a Jones fracture should also seek medical attention immediately if they develop any of the following symptoms:


A medical professional can give an accurate diagnosis of a Jones or other metatarsal fracture, and they can provide appropriate treatment.


A Jones fracture can be troublesome and is often difficult to heal, so proper management is key. Proper treatment depends on proper diagnosis.


To make a formal diagnosis of a Jones fracture, the surgeon will do the following:


Properly caring for a Jones fracture can begin even while waiting for a doctor’s care. As soon as pain is experienced, a patient should follow the RICE method.


For a Jones fracture, these methods are only meant as a measure to prevent the affected area from getting worse.


A doctor will immobilize the foot in a cast, cast boot, or stiff-soled shoe and may recommend surgery.


The treatment for a Jones fracture depends on several factors including:


A Jones fracture can be slow to heal. A person with this type of fracture may need to wear a cast for longer than initially recommended.


There is evidence, however, that patients who undergo surgery for the fracture may heal faster than those who do not.

A cast boot may be used before surgery to immobilize the foot.


Because a Jones fracture is often slow or resistant to healing, and there is a risk of reinjury, surgeons commonly operate on these fractures by repairing the break with a screw, rod, or plate.


The incision required to repair a Jones fracture is very small. This means that the surgery can be done as an outpatient procedure under general or local anesthesia.


During the procedure, the surgeon uses X-rays to ensure proper screw placement. The screw crosses the site of the fracture and squeezes the ends of it together.


Sometimes, bone grafting may be needed, particularly in chronic fractures that have not healed with other treatment. In these cases, a separate incision may be needed to insert the bone graft.


Because of the limited blood flow to the area, a Jones fracture has a higher likelihood of not healing than other metatarsal fractures, unless surgical treatment is given.


Of those treated nonsurgically, 15 to 20 percent of fractures may not heal. Other complications may include:


The healing time for a Jones fracture varies based on the treatment method, the severity of the fracture, and the patient.


Depending on the surgeon and the type of fracture, the person may not be allowed to put weight on the injured foot for the first 1 to 2 weeks after the surgery.


In some cases, a person with a Jones fracture may be allowed to bear weight through the heel for up to 6 weeks, depending on the severity of the fracture. After that, a weight-bearing walking boot is generally allowed.


A person who has had surgery to repair a Jones fracture can expect a return to all activity, including sports, 3-4 months after surgery. However, the doctor may recommend a period of physical therapy to recondition the injured area.

Tips and exercises for a good recovery


If a patient follows the doctor’s suggestions, they will have a higher chance of successfully recovering from a Jones fracture.