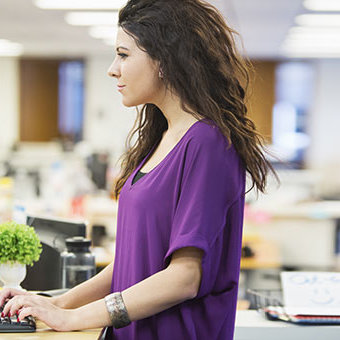 You already know that getting off your butt for periods of time throughout the day can reduce some of the harmful effects of too much sitting. (Hello, standing desk!) But a new study from the University of Glasgow in the U.K. suggests that you’ll get a bigger health boost if you focus not only on the number of hours you spend standing, but on the number of times you stand up, as well.

Specifically, men in the study burned more calories and fat when they stood up more frequently throughout an eight-hour period (for 90 seconds at a time), than when they stood for longer blocks (15 minutes at a time)—even though the total time they spent standing was the same.

This fact alone isn’t surprising, say the researchers, since each sit-to-stand (and stand-to-sit) transition requires muscle activation and energy expenditure; it’s also been shown that fidgeting and toe-tapping burn extra calories, for similar reasons. But this is the first time different standing intervals have been tested against each other, providing actual numbers to back up this common belief.

The research, published in Medicine & Science in Sports & Exercise, involved 10 overweight men who each participated in three 8-hour scenarios over the course of several weeks. In one scenario, the men sat for the entire day, getting up only for bathroom breaks. In a second scenario, they alternated sitting or standing every 15 minutes. The third scenario was similar to the second, except some of those blocks were broken down further into 90-second sit-and-stand intervals.

Put another way, the men burned about 76 calories more throughout the day when they stood in 15-minute blocks, compared to sitting only. But their bodies burned an additional 71 calories, on average—and oxidized about 7.1 grams more fat—when they upped the frequency of ups and downs.

Over a period of four weeks, the authors calculated, those scenarios could translate to a weight loss of 2.7 pounds and 4.9 pounds, respectively. The fact that standing more frequently boosted fat oxidation (the process by which the body breaks fat molecules) may also have implications for weight management, the authors say, since high fat-oxidation levels seem to protect against long-term weight gain.

Exercise physiologist Tom Holland, found of Team Holland LLC, says that despite the small sample size, the findings make sense and should be considered “excellent news.”

“Not only do you not have to stand all day while at work or at home, you will actually benefit by alternating sitting with standing,” Holland told RealSimple.com in an email. (Holland was not involved in the study.) “I believe one reason is that rising from a seated position and lowering your body weight back down repeatedly takes more effort and expends more energy than does continuously standing stationary.”

It may be tough—not to mention detrimental to your productivity—to change your position every minute and a half throughout the day. But try switching it up as frequently as you realistically can, says Holland. “Think of it as interval training,” he says. “You are in effect adding squats to your standing routine.”

It should be mentioned, however, that the researchers found no substantial effects on glucose, insulin, or triglyceride metabolism for either sit-stand scenario, compared to sitting only. In other words, it didn’t provide all of the physiological benefits that a more intense workout would.

So could standing up more frequently ever take the place of actual exercise? Not a chance, says Holland. “But it can help mitigate the deleterious effects of sitting for extended periods of time,” he says. “It’s a part of being more active throughout the day. It all adds up.”

We Interviewed The CEO of Anisa International To Discuss The Keeping And Care Of...